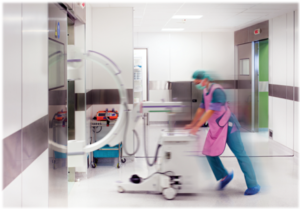 With major producers of CCD’s shutting down manufacturing factories, the gradual shift away from CCD Radiology Imaging Units (RIU’s) has been rapidly sped up and obsolescence of these units is imminent. CCD image sensors are a key component of camera lens assemblies that, together with an image intensifier, forms an RIU used for x-ray imaging and have been a staple in C-arms for decades. However, recent shifts in the manufacturing have left the future of C-arm technology for economy systems up in the air as CCD sensors face obsolescence. The gradual shifts in healthcare have slowly moved the field away from CCD C-arms towards newer imaging options, such as flat panel detectors, and this shift has begun to gain momentum. 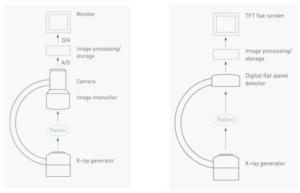 This year ON Semiconductor, formerly Kodak, announced the closing of its CCD factories, which follows Sony’s CCD shutdown a few years ago.  CMOS sensor performance is catching up or even surpassing the performance of CCD’s. The largest manufacturers of CCD technology are no longer producing, with very few options left.  Alternatives, such as CMOS-based cameras, are not worth redesign efforts due to significant time and cost investments of implementing a new product in preexisting RIU’s.  Many companies are now having to complete last time buys as they determine next steps which works in the short term to keep CCD units in the field. However, most last time buys only allow for a run time of 2-4 years to continue to use CCD and maintain service needs.

This sped up obsolescence is also moving along due to natural trends in the healthcare field. CCD RIU’s have been the main technology in C-arm units for multiple decades, and they still hold a strong position in cost-sensitive C-arm applications. We now see other key innovations beginning to take its place in these cost-sensitive applications, such as more advanced diagnostics known from high(er) end systems, and flat panel detectors.

The emergence of new technology is partnered with a new generation of doctors who are more receptive to changes in diagnostic images.  This combination leads to reexamining what is currently being used and overhauls in existing systems.  New RIU systems will provide multiple benefits such as distortion-free images, higher contrast range and better image sharpness.  The shift away from CCD cameras to flat panel detectors also prevents obsolescence from becoming an issue in healthcare. The question is:  Which flat detector technology is capable of replacing CCD-camera based systems while maintaining a balance of image quality, dose and price?

Finding alternatives now, rather than when last time buys run out, allows for a more gradual transition.  This also prevents the struggle of having to do so when the need becomes dire. These alternatives need to be part of the new generation of technology that is growing in the healthcare field, as CCD sensors are disappearing.  The key alternatives to CCD cameras are CMOS, Amorphous Silicon (aSi) flat panel detectors, and Indium Gallium Zinc Oxide (IGZO) flat panel detectors.  In the second blog of this three-part Mobile C-arm series, I will explore these alternatives further and include the benefits and drawbacks of each.