CONNECTIONCONFIG: WHAT DOES IT MEAN?

You are here:
Blog categoriesInterface Technologies 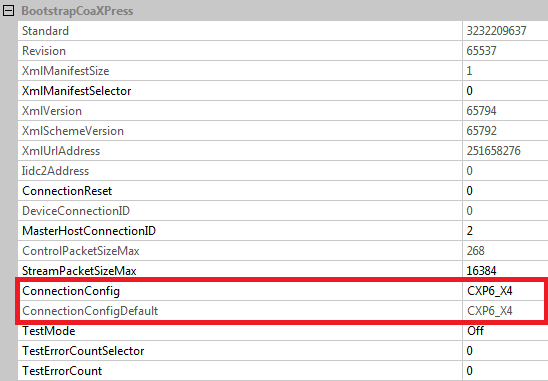 Today a new blog in the Bootstrap CoaXPress features blog series. This time we will take a closer look at the ConnectionConfig and the related ConnectionConfigDefault feature.

ConnectionConfig is one of the most used bootstrap features by the system engineer. This feature can be used to set the number of connections you would like to use at a data rate you want to operate at.

Maybe you are asking yourself why you would change this. However, if you are not operating the camera at the highest frame rate, there are very valid reasons to do this.

For example, going from CXP6 to CXP3 data rate increases the cable length used for connecting the camera to the frame grabber. Reducing the connections minimizes the number of cables to save costs and reduce system complexity. Of course both options reduce the maximum data rate and thus the maximum frame rate that can be obtained.

To understand this feature you have to understand a bit more about the discovery process between the camera and frame grabber. This is the process in which a communication channel is set up between the two devices.

Contrary to StreamPacketSizeMax, which we previously discussed, ConnectionConfig is a bootstrap feature that really can be used to configure the camera to your needs. We hope  this blog helps you maximize the benefits of ConnectionConfig!