This is the first in a series of articles about using Flat Field Correction in high-resolution Machine Vision cameras.

In a Machine Vision inspection system you might use multiple light sources and/or multiple lenses. They might be switched on all at the same time, or they might switch on one after the other to obtain different illumination for subsequent image frames.

In such a configuration each light source, in combination with the illumination optics, might create a different non-uniform background profile on your camera. Preferably you want to get rid of this background profile because it disturbs your image as it is not originating from the object of interest. On your image you prefer to only observe light profiles that are caused by the object that is under inspection.

A typical artifact caused by the light source and illumination optics is, for example, a decrease in intensity towards the edges of the image as illustrated in Figure 1a. What you actually want is shown in Figure 1b. 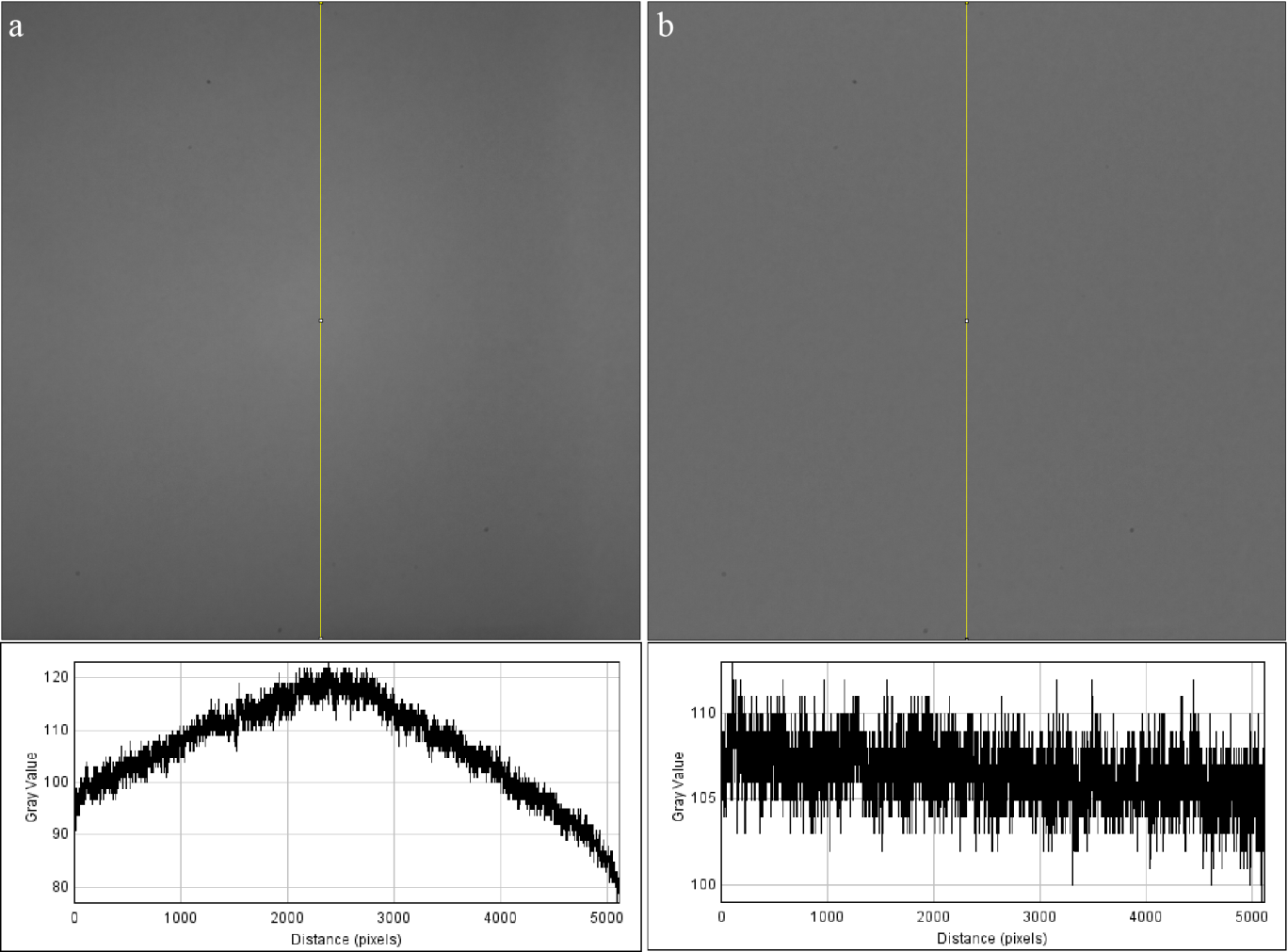 Figure 1. A typical example of an artifact due to the light source and illumination optics where the intensity towards the edges decreases (a). The desired result is shown in (b). The yellow vertical line in the 25 megapixel images is a measurement probe. The intensity along this line is shown in the lower two images.

THREE WAYS TO REMOVE ARTIFACTS CAUSED BY ILLUMINATION AND OPTICS

Of course the best way to eliminate a distortion is by not creating the distortion at all. To achieve this you would have to invest in your illumination hardware. Therefore, this is the most expensive option.

By acquiring one image with (data), and one image without (reference) the object that is under inspection, you can correct your data by performing a division (data/reference) or subtraction (data – reference). This image-capture sequence and processing would have to be implemented in the host software that reads out the camera.

High end machine vision cameras typically offer a form of flat field correction. Depending on how it is implemented this function can correct for distortions in the optical path, if it can be user calibrated. Although flat field correction works with a reference image, like in suggestion 2, the main difference is that the correction is performed within the camera instead of with the host software elsewhere in the imaging system. A corrected image is then outputted from the interface of the camera.

Our next two articles will focus on first the various FFC correction mechanisms that could be present in a camera, followed by an article on how to use FFC in practice.

Links to the other parts:

Part 1: How to remove light source and illumination optics artifacts from your camera image.

Part 2: Which types of flat field correction exist and why it matters for high resolution cameras.

Part 3: How to use flat field correction in practice.