CMOS sensor based defense cameras are gaining ground, but for long-term, reliable, high image quality applications, CCDs will continue to be the preferred option for a while.

On February 8th, we discussed the CCD vs. CMOS sensors in machine vision cameras.  We discussed that CMOS image sensors have shown significant improvements in quality and are quickly approaching that of CCD sensors, especially when sophisticated camera technology is used to optimize image uniformity. Our conclusion was that more and more, CMOS-sensor based cameras are a good option for many machine vision applications now and this trend will continue.[1]

As Adimec also serves the defense market, this has us considering whether CMOS sensors are also gaining the advantage there.  As with most things in technology, it is not a simple yes or no answer and depends on the specific needs of the application.

Depending which of the special requirements in the defense industry is most important, can help determine which technology is the best fit, such as

Typically the sensitivity of the sensor is evaluated based on the quantum efficiency, QE, or the chance that one photon generates one electron in the sensor at a given wavelength.  While this is a good indicator, it is also important to consider the read noise of the sensor.  These two combined give the overall sensitivity of the sensor, or the minimum amount of light you can see.  In general, CMOS sensors have a higher QE in the NIR due to their design structure, and this can be further optimized by producing the sensor using a thicker epitaxial layer (shown as CMOS 1-b in Figure 1 below).  So for instance, at 800nm, the CMOS sensor with the thicker epitaxial layer has the best QE. 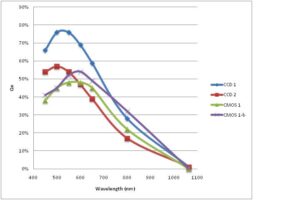 CCD 1 and CCD 2 are Interline Transfer CCDs; CMOS 1 and CMOS 1-b are CMOS sensors with a Global Shutter. 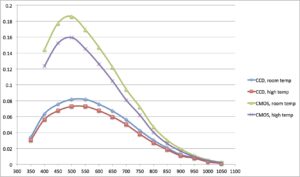 Cameras with either type of sensor can be ruggedized to perform in high shock and vibration environments.  The effects from high temperatures are different, though.  The numbers shown in the above figures 1 and 2 are for 25°C and read noise rises with the sensor temperature. The sensitivity advantage of CCD becomes even more pronounced as CCDs have lower noise at higher temperatures.  Because of optimized processes and structures, CCDs also perform much better in terms of image uniformity at higher temperatures.

CMOS sensors can still perform well, but may require additional camera functionality or even cooling to achieve the same noise performance and image uniformity at higher ambient temperatures.

When this is the most stringent requirement of the application, then CCD still has the advantage.  The global shutter performance with CCDs is nearly perfect.  With CMOS, there is either rolling shutter or global shutter options.  Rolling shutter allows for better sensitivity (lower read noise) of the sensor, but because not all of the pixels are integrated at the same time, there can be distortion in the image.  For viewing applications this is probably not a problem, but when freezing images and measuring a still image, this would not be acceptable.  CMOS global shutters are not yet as good as those for CCDs such that even when the shutter is closed, some light gets through.  This reduces the ability to use very short integration times to freeze motion.  That being said, many CMOS manufactures are focused on making major improvements with the global shutter performance.

Change is not a good thing in defense systems once a given configuration has been qualified and approved.  CCD sensors have been used in the military for many, many years.  The designs and processes are held constant for many years.  This can be further managed by the camera manufacturer.  CMOS sensors, on the other hand, are primarily for the consumer market and change very quickly.  There are now some CMOS sensor manufactures with leading edge designs that are planning longer term supply, so this is becoming less of a concern.

Because of the level of integration, CMOS sensors allow for lower power camera designs. This can be very important for systems that need to run on batteries in the field.

Fewer parts are required in a CMOS-based camera allowing for a smaller, lighter outline.  There are a large number of systems in the field using small, analog cameras.  Smaller and lighter cameras allow for higher resolution, digital cameras to fit within the envelope of existing systems.  It can also be greatly beneficial for wearable solutions or use on gun sights.

[1] When we talk about CCDs, we are referring to Interline Technology CCDs – the type most commonly used in machine vision and military systems.

For related information check out: http://image-sensors-world.blogspot.com/2011/05/sony-security-sensors-to-shift-from-ccd.html

Moving from CCD towards CMOS cameras as Many CCD Sensors go Obsolete
November 7, 2019

A CHEAT SHEET FOR EXPLAINING THE EMVA1288 PARAMETERS
October 4, 2018

Implementing a visible camera for both daylight and lowlight vision
May 4, 2018