CCD vs. CMOS Image sensors:  The lines are blurring

In machine vision there is an on-going evolution happening in the type of image sensor best-suited for various applications, with two camps firmly established: CCD and CMOS.  There is a lot of talk of the increased market share for CMOS sensors, and here we provide some technical analysis of why this is the case.

In the past, CCDs have been considered superior to CMOS because of their quality. CCD has traditionally offered higher dynamic range and higher resolution. It is generally acknowledged that a lower image quality will result in a lower measurement accuracy and repeatability. Plus, CCD’s inherent electronic shutter eliminates the need for a mechanical shutter. On the downside, CCD frame rates are slower, they require more power dissipation, and they cost more to manufacture and integrate than CMOS.

Recently, CMOS sensors have shown significant improvements in quality. Now, in addition to the higher speed performance, lower power requirements and higher integration potential of CMOS, CMOS sensor resolutions and data quality are approaching those of CCD sensors. Many are now available with global shutters or snapshot shutters for capturing images of moving objects without distortion. CMOS sensors are closing the gap in noise levels, an area where CCD used to be clearly superior.

Also, the speed of development in CMOS is faster, since it’s produced in non-dedicated fabs. So sensor prototypes can be developed and incorporated in cameras faster. Sensors are being produced using the same processes as microprocessors and memory chips. These processes are constantly improved in order to make faster and lower power chips. CCD sensors are using dedicated processes with a much slower innovation cycle.

Market data confirms that CMOS is gaining ground on CCD even in machine vision. This is somewhat distorted if viewed in general terms when consumer applications are considered (CMOS has distinct cost and integration benefits for consumer products). But even in high precision machine vision and other industrial applications, CMOS has emerged as a very viable alternative. 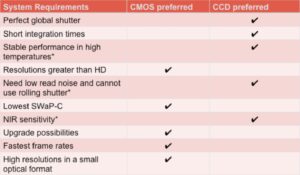 Despite improvements in CMOS, CCD still maintains an advantage, albeit a shrinking one, for applications that need the highest image quality in terms of uniformity, MTF, dynamic range, electronic shutter capability and image (to image) stability. The caveat being, of course, that they must be able to operate acceptably at a CCD-available speeds (state of the art CCD cameras are limited at 160 megapixels/second. Faster is possible, but only at significantly higher costs, camera size and power).

In terms of uniformity, CMOS sensors have a larger pixel-to-pixel non-uniformity because each pixel has its own readout circuitry and in most cases column ADCs are used (in CCD many pixels share the same output; ADCs are external.). Although offset and gain corrections are possible, linearity differences are very difficult.  Recently however, CMOS on-chip ADCs have improved dramatically, from 8 bits to 10 or even 12 bits.

In addition, dark current of the best CCD sensors is still better than of CMOS. CMOS sensors also have more problems with optical crosstalk due to the thicker stack on top of the pixels. This results in a lower accurate color reproduction, especially with small pixels.  Also, the MTF of a CMOS sensor is typically worse than that of a CCD. This is due to higher optical and electrical crosstalk (a larger problem with small pixels).

While the dynamic range of CMOS sensors with a rolling shutter and in-pixel CDS can be higher than a CCD sensor with the same pixel size, the read noise of previous generation CMOS sensors is much higher than that of CCD. This results in a lower sensitivity/dynamic range. CCD offers a nearly perfect electronic shutter. That means that all pixels integrate at exactly the same moment in time, and very short integration times can be used to freeze motion.

The argument gets stronger for CMOS

Fast CMOS enables improvements in throughput that are far superior to CCD and critical to the requirements of applications such as in semiconductor and PCB inspection.

Electronics inspection demands high frame rates and coverage of large areas, so the number of pixels per second is very high. Multiple outputs can boost bandwidth, and that’s relatively easy with CMOS’ parallel architecture. It’s more difficult to achieve this in CCD, since it needs many analog outputs, each requiring its own ADC.

Combined with the relative ease and cost-effectiveness of CMOS manufacturing, which uses much more widely available production capacity, CMOS is now poised to become the dominant platform of choice for even the most demanding industrial cameras.

However, makers of CMOS sensors realize that speed performance alone is not enough, as pointed out above – and they have begun to specifically address traditional shortcomings in CMOS quality. For example, new CMOS sensors with the latest global shutter architectures from companies like CMOSIS provide read noise levels comparable to, and in some cases better than, CCD.  The result is that at similar pixel sizes CMOS now bridges a historical 6db gap in dynamic range, comparable to CCD.

While there is still a need for CCD cameras, CMOS is catching up fast.  And, with sophisticated camera technology further leveling the quality comparison, CMOS’s advantages in speed, cost and integration are bound to win out in the long run.

Moving from CCD towards CMOS cameras as many CCD Sensors go obsolete
November 7, 2019

A CHEAT SHEET FOR EXPLAINING THE EMVA1288 PARAMETERS
October 4, 2018