In the world of cameras, the favored image sensor type is now evolving.  Two of the most popular visible sensor technologies found in the industry are CMOS (complementary metal-oxide-semiconductor) and CCD (charge-coupled device). In the past, CCD offered a higher image quality with better light sensitivity and reduced noise.  CMOS was known for its high-speed capability, lower cost of manufacturing, and reduced power consumption.  Determining the correct image sensor was not as simple as selecting the best sensor available but rather, customers chose a sensor optimized for their specific application.  In the imaging world today, CMOS sensor technology has improved significantly and is steadily becoming superior to CCD.

Recently, ON Semiconductor announced the upcoming product discontinuation of their CCD image sensors and will 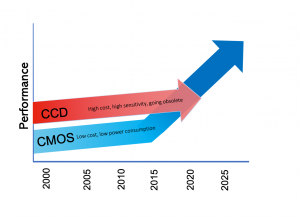 For more details see the official announcement from ON Semiconductor.

In light of this ongoing market transition we will be publishing a blog series where the following topics will be discussed in the coming weeks:

If you are considering moving to CMOS contact your local Adimec representative for support.

What is the relation between full well and shot noise? Part 2
August 9, 2022