5, 10 and 25 GigE Advances in Camera Interface Technology compared to CoaXPress 1.1 and 2.0

5, 10 and 25 GigE Advances in Camera Interface Technology compared to CoaXPress 1.1 and 2.0

Gigabit Ethernet vision was released in 2006 and provides a gigabit per second interface for cameras with a cable length of up to 100-meters.  That worked when cameras were low resolution or even now with a medium resolution camera (for example 12Mpx) and low frame rate requirements.  Now to get higher resolutions and support higher frame rates, that is higher bandwidth, the industry has begun to embrace 5, 10 and 25 GigE vision which is 5, 10 and 25 times faster than the original GigE Vision interface.  There is a compromise in cable length with speed up until the point optical cable takes over at 25GigE.  The new speeds are supported in some PCs but a relatively inexpensive Network Interface Card (NIC) can be added to virtually any modern PC to achieve these higher speeds.  In this article, we will look at the strengths and weaknesses of 5, 10 & 25 GigE Vision products and then compare them with the leader for high bandwidth performance, CoaXPress (CXP).

IEEE 802.3bz-2016 was released to provide an enhanced standard for twisted-pair Ethernet connectivity with speeds of 2.5 and 5 Gbps.  Intermediate speeds between the current 1 Gb and 10 Gb Ethernet standards are obtained. The resulting standards are called 2.5GBase-T and 5GBase-T, or 2.5 and 5 GigE Vision. Nbase-T technology allows ethernet connections to offer more flexibility with speeds up to 5 Gbps via standard Cat5e cables. This technology increases the data transmission capacity up to 100-meters with normal copper twisted pairs which tend to be the standard in legacy systems.

Standard copper cables (Cat6, Cat6a, and Cat7) used in 10GBase-T connections support up to 100 m length depending on the type of cable you use.  However, Cat6 cables can only be used for up to 55 m lengths, greater distance calls for Cat6a or Cat7 cables.  Fiber-optic cables provide transmission over much longer distances but do require a converter to generate the optical signal and an optical receiver in the NIC card.  10 Gigabit Ethernet does support Power-over-Ethernet (PoE) and the same cable.

25 GigE vision or 25 Gbase-T is very new to the camera world with only one camera company building cameras with this interface.  Emergent Vision has two cameras that use the 25 GigE vision protocol: one in area scan and one in line scan.  But they are only as fast as the Adimec CXP 1.1 cameras with the same sensor.  One is based on the CMV12000 (12Mpx) and the other the CMV50000 (50Mpx).  These cameras run at 188 and 30 fps respectively.  The connectors for the 25 GigE are gigantic in comparison to a CXP DIN 1.0/2.3 connector but the CXP does require a frame grabber that is more expensive than the 25GigE NIC.  The interface on these cameras is fiberoptic which pushes the cable length out to kilometers and the CoaXPress 2.0 standard does not include optical fiber yet so where extreme cable lengths are required the pendulum swings toward the 25GigE interface based in this simple comparison.

Enter the CoaXPress 2.0 standard which doubles the speed of CXP 1.1.  The speed of CXP 1.1 (over a single cable) is 6.125 Gbit/s and CXP 2.0 is 12.5 Gbit/s.  Now to get data throughput equivalent CXP 2.0 and 4 lanes you need the 50GigE vision which undoubtedly is coming, but when?  CXP2.0 uses micro BNC connectors that are small and rugged.  Cable length is 40 meters and cables are small and flexible.  The GigE Vision standard is lagging in terms of camera application as CXP 1.1 cameras have been available for a decade that match the performance of 25GigE which is just getting started.  There is more to compare than just cable length and bandwidth of course.  Latency and determinism are two very important characteristics of vision applications.  CXP 2.0 is just taking off but all the major frame grabber manufacturers have boards and several camera makers are designing and testing cameras.  You would need 50GigE cameras, which as I said has yet to be fielded, but that is what it will take to compete with the speed of CXP 2.0.  For an overview of the benefits of CXP 2.0 see here. 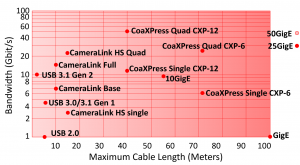 The figure above shows the existing camera interfaces with copper cables except for the 25 & 50 GigE datapoints that represent 1km fiberoptic transmission.  The 50 GigE datapoint is pink because it has not yet been fielded in a production camera. The figure above shows data points for various machine vision interfaces. For high speed and high resolution, you just can’t beat CXP.

Semiconductor Industry Resilient in 2021 and Expected to Grow: What does this mean for Inspection System Providers?
December 23, 2021