Switching from CCD to CMOS for Display Inspection: Part 2 Increase your Inspection Throughput 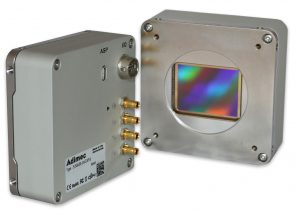 The highest speed of any camera in the resolution space with increased throughput due to increased field of view (FOV) makes the S-50A30 the leader in throughput.

The CMV50000 sensor in the S-50A30 is >4x faster than CCD image sensors in the >50 Mpx space at less than half the cost.  Consider the table below showing the CMV50k compared to three high resolution CCD image sensors and you see a huge increase in speed.

Compared to 25 Mpx there is an increase in throughput with less movement steps due to the increase in Field of View with the 50 Mpx sensor which allows more of the item under test to be imaged, be that area or number of components.  Even with its rather slow frame rate relative to lower resolution machine vision cameras the increased resolution leads to a much larger field of view that results in the S-50A30 being the winner in the throughput race as shown in the following graphic and table.

The S-50A30 also gives improved resolution at constant FOV as shown in the example below (left) which compares a 25 Mpx camera (left image) to the S-50A30 (right image).  The table graphic to the left shows the increase in measurement resolution for constant field of view.

Technically not related to camera throughput but related to throughput of your design team is that the S-50A30 will also support short system development times and short time to market due to low cable complexity, easy Adimec Connect & GrabTM experience and optimized true accurate image.  This approach allows imaging engineers to focus on system development and simplifies single and multi-camera vision applications.

Again, we have shown that the S-50A30 provides more than just higher resolution.  Speed cost, throughput and Adimec Connect & Grab all make this camera a stellar choice for machine vision applications.  In part three we will show further examples of image quality improvement including its suitability for 2D and 3D metrology, improved sensitivity and an example of its applicability to display inspection.