According to the CoaXPress standard, triggering over CoaXPress (CXP) has a fixed latency of 3.4 µs with an accuracy of ± 4 ns. In this blog I will show you what these numbers mean to the vision engineer.

The digital CXP signal is built up with characters. Each character consists of 10 bits. The package of characters that forms the trigger signal is 6 characters long. The low speed up-connection has a data rate of 20.83 Mbps. This means a bit interval of 48 ns. A character of 10 bits is thus sent in 480 ns and the trigger package is 6*480 = 2880 ns. Thus a fixed delay of 2.9 µs would be sufficient to correct for the length of the trigger package. This does thus not yet explain the 3.4 µs which is actually 7 characters: 7*480 = 3360 ns. So why is the additional character delay required?

This seventh character is required to get the timing accurate with a sub character resolution. Without a correction mechanism, a trigger package could only be created at the start of a new character. This would mean the trigger would have a jitter of 480 ns. The seven character fixed delay allows the CXP protocol to reduce the unpredictable jitter of 480 ns to a jitter of only 4 ns.

CoaXPress uses the following trick to achieve this high trigger accuracy. At the instant a trigger is created, a counter will start. This counter can count up to 239. This means it divides the character time duration in 480/240 = 2 ns intervals. The value from the counter is coded in the trigger package. At the camera, this counter value is used to reproduce the trigger at exactly 6 + 1 characters later in time. On each side, the frame grabber and the camera, the accuracy of the counter is 2 ns. In total, the accuracy or expected jitter is thus only 4 ns. This explains how CXP is able to provide a trigger to the camera with a fixed predictable latency of 3.4 µs with a jitter of only 4 ns. 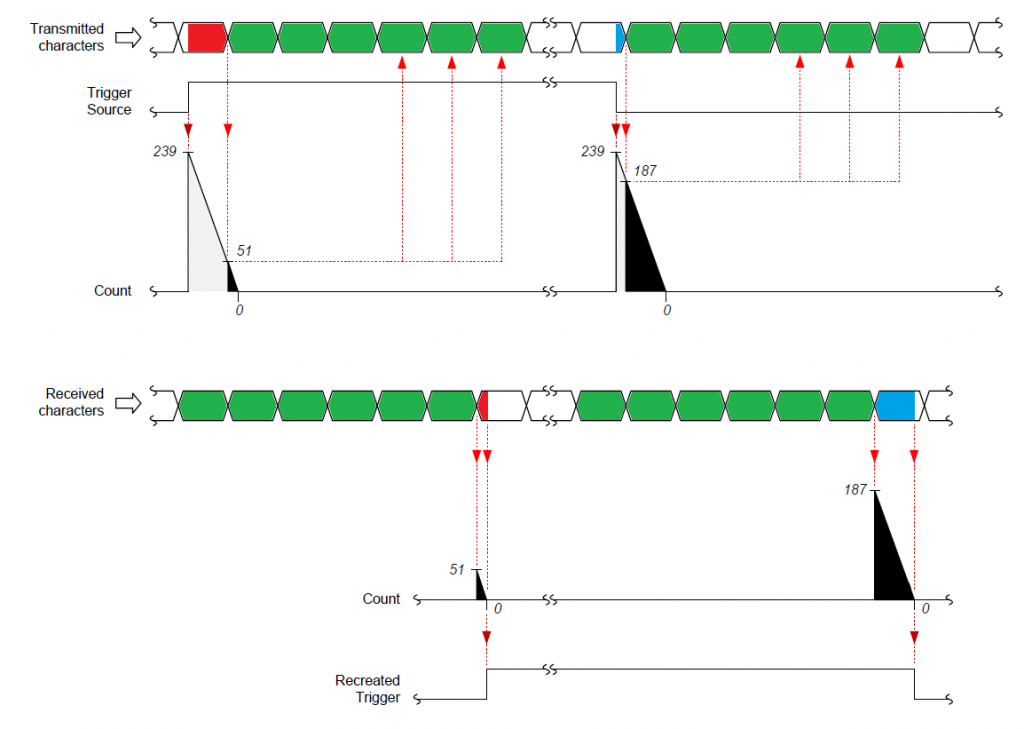 It is important to know that the CXP standard actually describes a maximum accuracy. The standard literally states: “The chosen accuracy and usage of this timing correction value is left as a quality of implementation at both the Host and Device.” A lower accuracy of the trigger correction is obtained by using a less accurate counter that divides the character into intervals of 4 ns, 8 ns, 16 ns, or higher instead of using the 2 ns intervals.