CoaXPress was originally developed by 6 companies, among which of whom Adimec, EqcoLogic and Active Silicon where the biggest drivers in 2008. Their goal was to develop a successor for legacy standards, addressing the need for a high-speed vision and data-rich communication interface. The CXP standard was first demonstrated at the 2008 Vision tradeshow after which a standards writing consortium of industrial companies was formed early 2009. By 2010 the Japan Industry Imaging Association (JIIA) adopted CoaXPress to mature it into an official standard. The first CXP 1.0 draft version was presented in December 2010 and officially released in March 2011.

The relentless trend for higher speeds in demanding (machine) vision application results in the need for even faster cameras – thus initiating a new generation of sensors. These new CMOS sensors deliver large resolution images at impressively high speed, producing a huge increase in data rates. This amount of data goes far beyond the capabilities of established interfaces, such as Camera Link, GigE Vision, and USB3. The CoaXPress standards support these growing bandwidth requirements for the next decade, AND also satisfies the additional requirements for longer cable length, greater cable reliability and flexibility, real-time behavior, and cost efficiency. Due to the use of standard coaxial cable and the bandwidth, CoaXPress is not only interesting for machine vision applications but also highly suitable for applications in the medical and defense & security markets where use of coaxial cable is prevalent. By using the same coaxial cables, CoaXPress enables smooth upgrades from analog to digital video within existing infrastructures.

Being a new interface standard in 2010, CoaXPress was viewed as a risky option amongst the established legacy camera interfaces. There was only a single source for the transceiver/receiver chip and it took a few years before it had the backing by JIIA (and then the G3).

Now that CoaXPress has gained global momentum and there are multiple IP core manufacturers, CXP is the least risky of the interface standards to choose for future vison systems. CoaXPress continues to offer the fastest speeds with power and camera control all in long, flexible cables. CoaXPress 2.0 will go to even faster speeds without losing cable length. But it is not just the technology that makes CXP low risk, also the well-controlled standardization effort makes CXP a solid choice.

Is it possible to future proof?

Image system designers who are upgrading to a new technology, they want to see what the second and third generation of a standard will be. No one wants to make a change now, only to make a complete system redesign in a few years when double data rates are needed. Many manufacturers are at bandwidth of 6.25 Gbps per cable to do data rates of 12 Megapixels at 187 fps (4 cables). In 5 years, typical data rates will be double for many applications and the next generation of CoaXPress will offer 12.5 Gbps per cable to support this.

An industry standard also needs to be well-controlled to make sure the changes won’t undo the ease of upgrading. For instance, with some other emerging high-speed interfaces, there is a limited availability of frame grabbers and all have different connectors that are not compatible. Or with others, the speed increase can be met but only with a significant drop in cable length. For instance, USB 3.1 will offer an increase in the data rate to 10 Gbps per cable, the cable length is limited to only 1 meter. 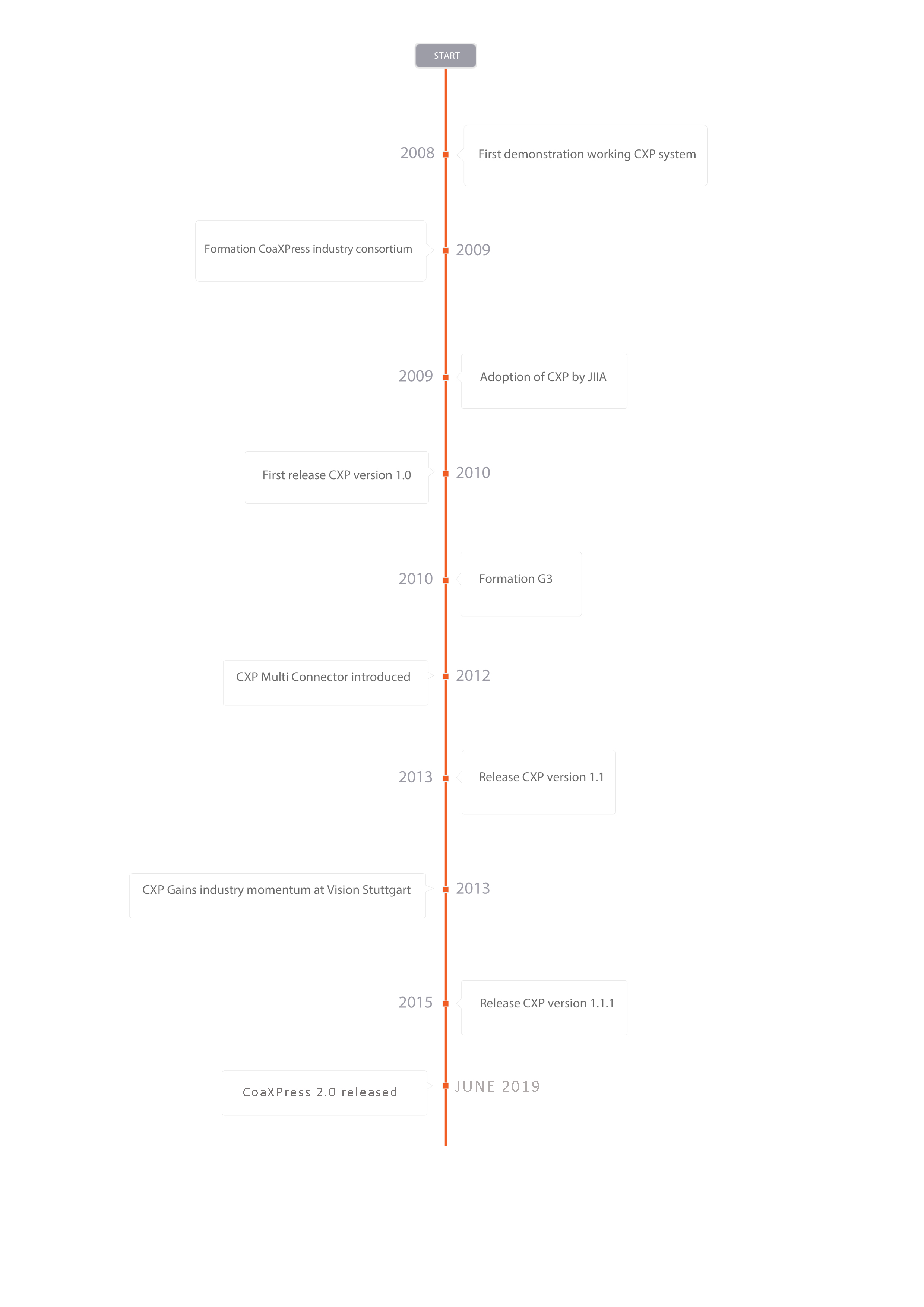 NEXT: CoaXPress Downloads
Go to Top